As everyone knows this has been an extremely cold and snowy winter all across the region, with people anxiously awaiting the warmth of spring. The brutally cold temperatures in February have dipped to as low as -20 degrees with the wind chill in certain areas, resulting in the Hudson River completely freezing over.

The U.S. Coast Guard icebreaker the Sturgeon Bay has been clearing a shipping lane on the river from New York City to Albany to ensure that barges can deliver jet fuel, gasoline and home heating oil as well as road salt, cement and scrap metals to customers and businesses. 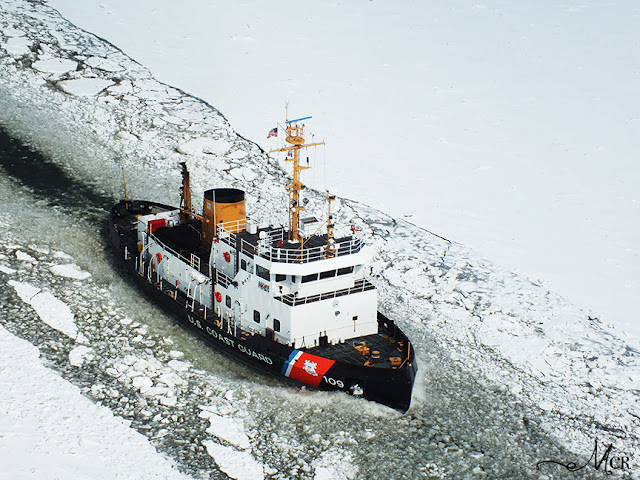 In a phone interview, Commander Lt. Kenneth R. Sauerbrunn USCG said the Coast Guard designates ice season from December 15 through April 1. He said the Sturgeon Bay has broken through ice up to 8 inches thick, with some snow capped ice areas reaching 18 inches, but the ship is capable of handling ice 30 inches thick, a scenario Sauerbrunn said he has not had the opportunity to witness.

The Sturgeon Bay is 140 feet in length with a beam height of 37.5, is powered by two diesel engines and displaces 662 tons. To break up the ice the ship uses a low pressure air hull lubrication system, called the bubbler method, which forces air and water between the hull and the ice to break up the ice.

Sauerbrunn described how the system works.

“Throughout the hull there are little ports that air shoots out of and it actually looks like the ship is sitting in a bubble bath; there’s just bubbles coming out from underneath the water all around the ship. That helps us in very thick ice by forcing water up between the hull and the thick ice on the side of the hull and it creates that little bit of lubrication [and] actually makes us much more efficient,” he said.

Sauerbrunn said his ship is the most advanced domestic type in today’s Coast Guard fleet. In addition, sister ship ‘Thunder Bay’ and the 65 foot Coast Guard cutter ‘Wire’ are presently operating on the Hudson River. He said the Sturgeon Bay operates on the river for up to 3 weeks before returning to their home port of Bayonne, NJ where routine maintenance and preventative engineering work is performed “just to make sure that we’re always fully operational.”
Sauerbrunn has a year round crew of 17 on board.

“We each stand 4 hour watches…and a new watch comes on every 4 hours,” he said, adding that it is too dangerous to operate the ship cutting through ice at night.

“That allows us to ride up onto the ice…and the weight of the ship crushes the ice,” he said, adding that the design produces a “very big wake and the wake helps break up ice on either side of us; not only are we crushing directly beneath the hull but if we are moving fast enough it crushes ice on either side.” He said his ship can reach a maximum speed of 12 knots, or approximately 15 mph. The ship initially cuts a path that is nearly 40 feet wide when the ice is very think but after several passes, they are able to expand that to “a nice wide track” of nearly 150 feet. In the narrow parts of the river they keep their widths to 100 feet but in other sections, from Poughkeepsie south, they have the room to create paths that are up to 250 feet across because of the river’s width and depth.

Sauerbrunn said sections of the river are not wide enough for two ships to pass each other, especially north of Kingston.

“There are certain designated spots throughout the river that the Coast Guard carves out extra wide and we call those passing zones,” he said. “[When] we have southbound and northbound traffic meeting they try and time it so they meet in these wide passing zones.”

Sauerbrunn said there are five areas between Kingston and Albany where they form these passing lanes. He said there is a particularly narrow area of the river by West Point known as ‘World’s End.’

“That’s actually one of several designated choke points; areas in the river where there is a tight bend or ice has been known to accumulate very easily,” he said, adding that Crum Elbow above Poughkeepsie is another “major choke point and others as you go north.”

Sauerbrunn said there is an advantage to limiting the width of a track.

Sauerbrunn called this winter the “worst one since 2004; the most ice as far as thickness and as far as percent coverage.” He said this has resulted in a record number of requests for ice breaking assistance on the river.

Sauerbrunn recalled that recently his ship was able to free up 8 barges near Germantown that were “stacked up and all stuck and no one could get around each other. To know that we got all 8 vessels moving south and unstuck [is] very satisfying, knowing that we’re out there making a difference.”

Sauerbrunn, a graduate of the U. S. Coast Guard Academy in New London, Ct., said he and his job are a “perfect fit.”

“I didn’t know what I was getting myself into when I joined, but shortly thereafter I realized that it’s an incredible organization…I can’t imagine doing anything else,” he said.